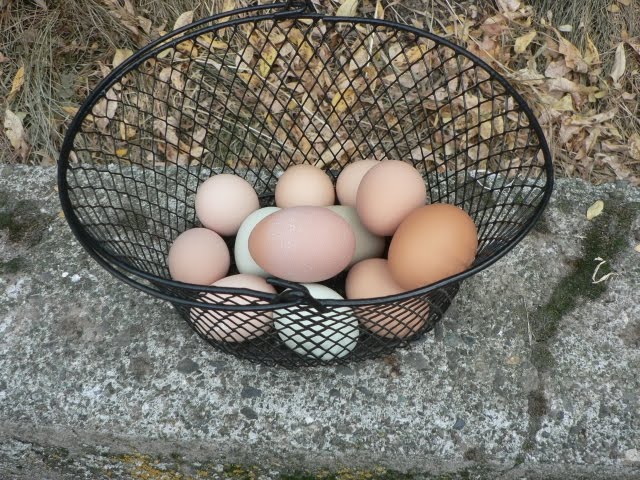 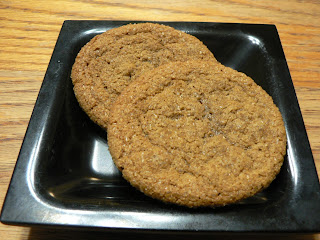 I recently stumbled across a recipe for soft and chewy ginger cookies on www.the-baker-chick.com.  I feared that they would be overwhelmingly sharp with ginger, but decided to try them anyway.  Good thing I did - I think I've found my new favorite cookie (or one of them, anyway)!  Here's my gf adaptation of her recipe:


Preheat oven to 350 degrees F.
Mix together the flour, ginger, baking soda, cinnamon, cloves, salt and xanthan gum. Set aside.
In a large bowl, cream together the shortening and sugars until light and fluffy. Beat in the egg,
then mix in the water and molasses.
Gradually mix the sifted ingredients into the molasses mixture. Stir in the candied ginger.
Chill dough for 15 minutes to make it easier to handle.
Shape dough into 1 inch sized balls or use a 1 1/2 Tablespoon scoop, and roll them in the raw sugar. Place the cookies 2 inches apart onto a parchment or silpat-lined cookie sheet, and flatten slightly.
Bake for 8 to 10 minutes in the preheated oven. Allow cookies to cool on baking sheet for
5 minutes before removing to a wire rack to cool completely. Store in an airtight container.

I've always loved waffles. When I was little, my family would enjoy brunch with our friends Bill and Mary.  They lived, at the time, in a large, canvas, Army tent, which alone made it a memorable event.  However, the homemade waffles, often slathered with honey from our own bees was something truly delightful.
After that time had passed, waffles became a less frequent indulgence.  We had a heavy, cast iron waffle iron that we'd occasionally pull down and cook waffles over the wood-burning kitchen stove, but that was a rare event.  More often we turned to the easier-made pancake for weekend breakfasts.
In my adult life, I've owned cheap waffle irons that sort-of did the job, but not very well - always leaving me frustrated and missing the waffles of my childhood.  A couple of months ago, I decided enough was enough!  The waffles had stuck to the iron so badly that unless it could have been soaked, the waffle bits were not coming off.  I hate to spend money on new kitchen gadgets and this one seemed rather frivolous, but after a week or so, I broke down and splurged.  I spent lots of time reading reviews and comparing models; weighing the pros and cons.  I finally settled on this beauty - the Waring Pro WMK600 Double Belgian Waffle Maker 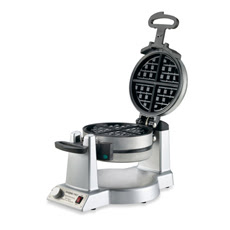 I love that this iron makes two waffles at once!  Makes feeding the family (and making extras) SO much quicker.  Now it's actually feasible to make waffles, rather than it being an all-morning affair.

I make a large batch of waffles - about 14-16, which will give us two meals worth (the boys can really put these away!).  This waffle iron makes 7"across x 1"wide waffles, so you'll get a lot more waffles if you're using a standard waffle iron. 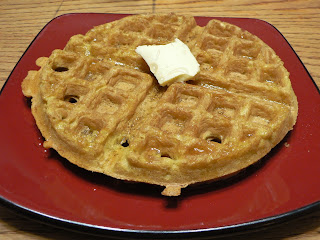 Mix all dry ingredients in large mixer bowl.  Add oil, eggs, water and lemon juice.  Mix well, scraping the sides and bottom of the bowl once, then beat for about 3 minutes. Meanwhile, heat up your waffle iron.  When fully heated, measure batter according to your iron and cook the waffles.  Enjoy!
Waffles can be frozen for quick breakfasts - ours never last that long, though.  We'll save extras for the next day and give them a quick re-heat on the waffle iron to re-crisp them.

Posted by Raechel at 9:20 AM No comments:

A friend requested this recipe and since I didn't have it on the blog yet, I figured I'd just post it here. 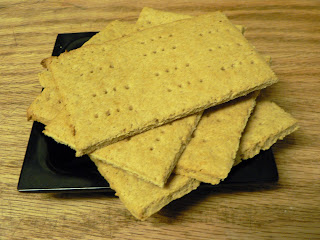 In a mixer bowl, beat honey, molasses, brown sugar, peanut butter, & shortening until smooth. In a separate bowl combine water or milk substitute with lemon juice and vanilla and set aside. In a third bowl, mix dry ingredients.  Stir them and liquid mixture, alternately, into molasses mixture, stirring well after each addition.  Let dough rest for a few minutes.
Preheat oven to 400 degrees.  Lightly oil two baking sheets (or, alternately, use Silpat baking mats).
Roll out dough between sheets of plastic wrap to a thickness of 1/16th inch.  Cut into 2 1/2-inch squares and prick with a fork.  Carefully transfer to baking sheets, leaving about an inch between.
Bake for 6 to 8 minutes, or until lightly browned.  Cool on wire racks.  Store in an airtight container or freeze.

Posted by Raechel at 5:06 PM No comments:

I'm baaaack.  Hopefully.  I've been thinking about this blog a lot lately and am hoping to start posting regularly again. 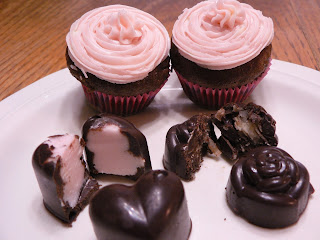 I'm loving the subtle pink created with the blood orange juice.  In the past, I've used hibiscus for an almost neon pink for Valentine's Day treats, but it looked a little unnatural. I much prefer this.  I used this "Buttermilk" Chocolate Cake recipe for the mini cupcakes, and added a couple tablespoons of raspberry puree as part of the liquid to give a subtle raspberry flavor.  The frosting is simply powdered sugar, shortening, a tad bit of salt and blood orange juice for the liquid.

The chocolates were made in my new silicon chocolate molds, which I LOVE (thanks, Mom)!  I used melted Enjoy Life chocolate chunks, which I spread over the bottom and sides of the molds.  Into half of them, I dropped a "creme" made of powdered sugar, shortening, blood orange juice and just a drop of orange oil.  The other half were filled with a bit of coconut mixed with honey, salt and vanilla.  Then all the chocolates got another layer of melted chocolate over the top and set in the refrigerator for about 15 minutes.

Hope you all had a wonderful Valentine's Day, too!

I hope you all had a wonderful Thanksgiving with family and/or friends.  We spent a wonderful few days with my family this year - the first Thanksgiving I've spent there since I moved out after high school!  Usually, we spend the holiday with my in-laws, but couldn't manage the long travel time this year.

Somehow, November just slipped right by me...as has much of this year.  During November, though, I was seeing many posts on Facebook, giving daily thanks for things.  I kept thinking, "what a great idea, I should do that...".  And yet, the days kept passing me by and I kept not acting.  On the same thread, I've recently been reading two very interesting books about scaling down and living more simply - Radical Simplicity: Creating an Authentic Life by Dan Price, and Radical Simplicity: Small Footprints on a Finite Earth.  These have really gotten me pondering my life and the things I am grateful for and the things I should be more aware of and work at scaling down.  So often we take things for granted and feel entitled to so many things in this consumeristic society.  I want to be more conscious and more thankful in going forward.  I challenge all of you to do the same.  Re-think what is necessary and important in your life.  Embrace it and stop the cycle of always wanting, wanting more.
Posted by Raechel at 9:42 AM No comments:

Our fair is a few weeks away, yet, but a friend was asking me for an elephant ear recipe the other day, so I thought I'd take a few minutes and add it here.  Last year, I surprised my boys when we went to the fair and packed a picnic lunch of "fair food" - hotdogs, potato chips and elephant ears.  You should have seen the looks on their faces!  After years of yearning for elephant ears - their smell wafting through the fairgrounds, I finally came across a recipe that I could tweak to satisfy our cravings.

Sift the rice flour, potato starch and baking powder into a large bowl.  Add the salt.  Make a well in the center and add the oil.  Gradually stir in the water, mixing until a thick batter is formed.

Heat 1/2 inch oil in frying pan and pour in enough batter to form a round about 4-5 inches across.  Fry until golden brown, then turn and brown the other side.  Drain on paper towels very briefly, then dredge in cinnamon-sugar.  Place back on paper towel.  Repeat with the remaining batter.  Add more oil to the pan as needed, ensuring it is heated through before use.

*I used a clean, empty ketchup bottle to squeeze the batter into the oil, a la funnel cake-style.
Posted by Raechel at 10:19 PM 2 comments:

Okay, thanks to a prod from a friend, I'm going to try to get better about posting again!  Honest!

So, about a month ago, I ran across a new yogurt - Amande - an almond-milk-based yogurt from Cascade.  What really got me excited was that I can actually have it!  (Other yogurts, like the SoDelicious Coconut, use guar gum, which doesn't agree with me.)  Amande is reasonably priced (compared to other comparable yogurts), around $1.50/6oz. container, or $1.30 on sale.  It's gluten-, dairy-, soy-free and fruit juice sweetened.  Locally, I've only been able to try the peach and raspberry flavors, but I saw the other flavors at a store by my mom's.  I'll be waiting to try those soon!  The boys also got to try the yogurt...RAVE reviews!  We all loved the creamy texture.  I appreciated the natural colors (but not "natural" grey-tinged like the Riceara.).  The peach left a bit to be desired flavor-wise, as it was pretty mellow, but that could have been just me getting used to the 'juice sweetened' aspect.  I really liked the raspberry one, though - very tasty!
Posted by Raechel at 2:07 PM 2 comments:

Raechel
Moscow, Idaho, United States
I'm a mom of 3 boys who began the tremendous journey of going gluten-, dairy-, and soy-free five and a half years ago. I cook most things from scratch, and am becoming quite adept at converting recipes. I enjoy gardening, canning,raising chickens and am striving to return to my simpler roots.